THREE-YEAR-OLD RIPLEY EHRLICH is already a fan of fluffy pink tulle tutus. Yet, she will never wear one to preschool, unless it is Halloween, as per a rule made by her mother, Los Angeles-based fashion designer Jenni Kayne.

"My daughter loves tutus, but those are for dress-up," said Ms. Kayne, who keeps the colorful garments in her daughter's play area. "I know people might think it is a little controlling, but I don't put anything in my kids' closet I wouldn't want them to wear." 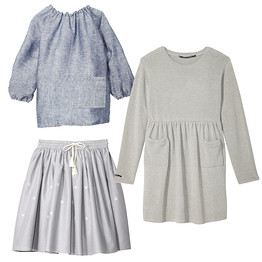 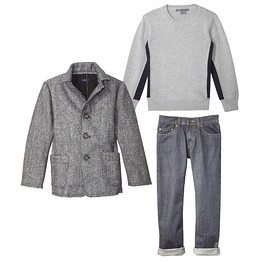 Ms. Kayne—who included a sparkle-free children's floor in her new lifestyle store, Jenni Kayne Home in Montecito, Calif.—is hardly alone in rejecting the sizable part of the children's market where oversize bows, sequins, sports logos and garish colors are the norm. And though it can be difficult to explain to your beloved cherub why he cannot have the light-up Skechers his classmates are wearing, American parents are increasingly taking a page from their European counterparts and outfitting their kids in more tasteful fare. Think pared-down cotton dresses for girls and engineer-stripe pants and logo-free T-shirts for boys.

"There's a growing trend toward minimalism, toward something that's a little more timeless, a little more quality," said Adrienne Sugden, the designer and owner of Neige, a California-based company that designs children's clothes that are classic with clean lines.

That wasn't true a decade ago when Ms. Sugden, then an assistant designer at Vera Wang, began to entertain the idea of starting her own children's line and noticed that the kids' department was in need of a refresh. She saw the category as either overly decorated or far too traditional and conservative. Her wares have a sense of playfulness—"not scaled-down adult clothes," in her words—and a refreshing sense of simplicity. Ms. Sugden's label now sells in some 200 stores around the country.

Former fashion editor Bronagh Staley, founder of New York-based children's shop Sweet William, thinks the American market has also changed because designers no longer fear the stigma of working in kids' apparel. "It used to be that anyone with really good taste thought it wasn't cool to jump into kids'," said Ms. Staley. When she opened her shop in 2007, "we didn't care about the 'cool factor,' " she added.

It's probably a chicken-and-egg situation to figure out which came first—the merchandise or the demand for it—but if the bandwidth devoted to kid-friendly organic recipes and Suri Cruise's footwear is any indication, childhood has never been more fetishized than it is by the current generation of parents. More evidence: children's lines launched by adult labels, such as J.Crew's CrewCuts, and most recently, a baby and kids' collection from Vince, a maker of edgy basics, which launched in June with scaled-down versions of slim-cut pants and cashmere sweaters.

Ms. Staley now has two outposts—the original in Brooklyn and another in downtown Manhattan—which stock a mix of American labels, such as Nico Nico and Anais & I, as well as European ones. Stateside, parents can also shop on e-commerce sites, like Paris-based Smallable, which make those Danish onesies and French cashmere sweaters easier to nab.

‘'It used to be that anyone with good taste thought it wasn't cool to jump into kids.'’

Having options and access clearly isn't a problem. What can be an issue is the Battle of the Light-Up Skechers, where parents face off with their young children in matters of taste. Personally, I had only to watch a single very soft and very expensive beige sweater collect dust on a hanger in my toddler daughter's closet four years ago to learn my lesson. My fantasies of sending her and her twin brother off to school in tasteful gray-flannel jumpers have since been modified. I now buy pieces in stretchy cotton with elastic waistbands for my son, and I indulge my daughter's love of mismatched prints. (I still draw the line at light-up shoes, and wince every time I hear my kids tell their friends that their "Mommy doesn't believe in them," as if the shoes were a religion).

Balance is key. Letting kids express themselves through clothes—even if that means tutus—teaches them to listen to their own voice and to learn what feels right, said Christia Spears Brown, a professor of developmental psychology at the University of Kentucky and author of "Parenting Beyond Pink and Blue: How to Raise Your Kids Free of Gender Stereotypes." She added, "Parents have to pick battles because each one takes so much effort." Ms. Sugden and Ms. Spears Brown, who both have tween daughters, draw the line at age-inappropriate styles such as navel-baring tops but allow the occasional bit of sparkle.

While it is easy to protest the idea of spending $66 for a 2-year-old's smock, an argument can be made for buying your kids clothes that are both ethically produced and of sufficient quality to avoid becoming as disposable (and polluting) as diapers. Ms. Sugden made the case for handing pieces down. "The one thing about the market I service is that [my clientele] will have three children wear them through," she said. "It's how clothes used to be. You'd be careful about what you bought and take care of it. That mentality is a big driver of this market."

Ms. Kayne advocates a mix of high and low. "I will buy jeans for my kids at Gap, because they make them so well," she said. "But I will buy sweaters from Bonpoint always a size or two too large so they grow into them and can wear them for a few years." She also thinks Spanish fast-fashioneer Zara has good options for children. "The trick is to be creative with how you spend your money," Ms. Kayne added. "If you paid attention to how often you replace that kind of disposable clothing, you'd see that it really adds up."